An Inside Look At The New TMC - KTEN.com - Texoma news, weather and sports

An Inside Look At The New TMC 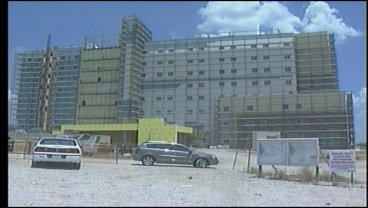 Now, a look inside our new Texoma Medical Center. When all is said and done, the facility will cost more than $200 million, and that's without all the equipment! Before crews move all the medical machinery in though, KTEN's Jhen Kordela has a sneak peak.

"It's going to be the largest investment that's ever hit Grayson County," says Jerdy Gary, TMC board chairman.

As the investment takes shape, local city officials and those involved with the new hospital are all smiles.

"I'm proud for Grayson County, and I'm proud to be a small part of the development," says Tom Johnson, who sold the land to TMC.

It's the first time the unfinished facility has officially opened up for a guided tour -- a walk through of the first three floors, which include, operating rooms, private patient rooms and the OBGYN.

"It's going to bring outstanding, state of the art care to everyone in this part of the state -- as well as Southern Oklahoma," says Gary. "And, more than that, it's going to be an engine that drives economic development on all these four corners out here."

Equipped with a trauma center and 165 beds, the new Texoma Medical Center stretches out over 300,000 square feet with room to grow.

TMC expects the hospital to be move-in ready by December, with a predicted open date set for February 2010.