Magnolia Festival Wraps Up In Durant 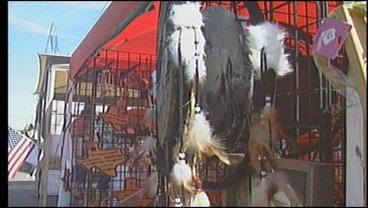 Even while funds are low, the city of Durant's annual magnolia festival drew in a steady crowd this weekend. KTEN's Jhen Kordela attended the event and has more.

Despite a slow national economy, the magnolia capital of Oklahoma is maintaining strength.

"People have really turned out," says James Dunegan, Durant city manager, "but our economy here is still holding out well."

In celebration of Durant's 13th year of association with the flower, its residents and visitors found the funds for airbrush tattoos, purses -- well, just about anything you think of.

"Each booth is responsible for the sales tax themselves, which actually goes back to the city," says Janet Reed, executive director of the Durant Chamber of Commerce.

With merchants traveling the festival circuits from all over the United States, the city sales tax stays here. And, local vendors create venues of their own.

Like, one jewel mining booth, where proceeds go toward playground equipment at the Durant Intermediate school.

Or, the Silo school baseball team, which is raising money, after winning state, for it's annual trip to Florida. Team members are also teaching the younger crowd to follow in their footsteps. All, while getting an opportunity to cool off.