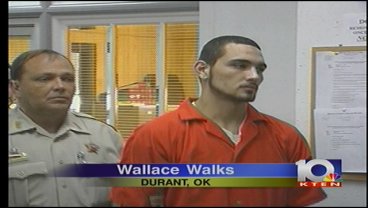 A Bryan County jailer and the inmate he's accused of helping escape from jail are now both back behind bars.

Friday afternoon, Billy Wallace, 18 - the man who escaped from Bryan County authorities twice was back in court, as well as Jessica Miller, Wallace's girlfriend, who met him in a "get-a-way-car" after his second escape.

Also in the courtroom to be arraigned was former jailer Anthony Groff who was arrested for giving Wallace keys to his handcuffs and shackles.

Groff is the Bryan County jailer accused of handing Wallace keys to his handcuffs and leg irons so that he could make a run for it. He's expected to be back in court next month along with Wallace and his girlfriend Jessica Miller.

Sheriff Bill Sturch says Wallace will be at the Bryan County jail until his trial is over and then he'll be transferred to a maximum security prison.

Also arrested as part of this fiasco, a teenaged boy, who was also in the "get-a-way car." In all, Wallaces escape lasted about 15 minutes. He now faces two counts of attempting to escape.