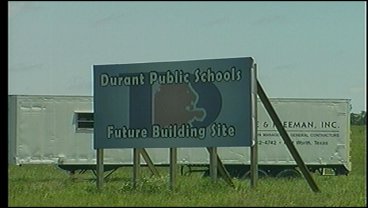 Durant ISD says they've got the land, and plans to break ground on a new high school are still set for this summer, but now they'll have to explore new options to finance the building.

The result of a three hour long meeting between Durant ISD and Bryan County commissioners was not what the district was hoping for.

They wanted the county to create a school district finance authority to oversee funding for the Durant High School that would have entailed accepting a $44,000,000 bond.

"I believe that this would have been the biggest financial mistake in the history of Bryan County."

Superintendent Dr. Jason Simeroth says it's just a hurdle, and they'll get through it.

"We had come in with a very optimistic opportunity for the district and for the county, but we're still going to build that high school for our kids."

The new school would be built off Highway 69/75, just north of the Washington Street exit.

Last year Durant residents approved a 25-year, five-eighths of one percent sales tax to finance the new school. Simeroth says the tax should generate enough money, but a bond would let them get a head start on the school.