Stimulus Money Hard at Work on I-35 - KTEN.com - Texoma news, weather and sports

Stimulus Money Hard at Work on I-35 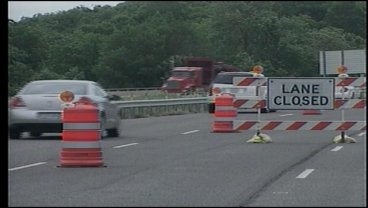 $5.2 million worth of stimulus money hard at work on I-35.  But it could slow you down.  The southbound lane in the Arbuckles is down to one lane for about a mile.  Meredith Saldana has more.

The engineering manager tells me on an average weekday that stretch of the interstate sees about 26,000 vehicles a day.

So they do expect some traffic delays.

The construction starts at the Carter County-Murray County line and extends north about 6.5 miles.

Crews are working to resurface this stretch of I-35 and this construction may look familiar.

But these are repairs that must be made.

Zishka says, "The biggest problem you have, we have a large volume of traffic.  When you reduce it down to 1 lane it tends to back up.  Especially when you have your pavement crews out there working.  People tend to slow down and while they're paving we'll probably have traffic backed up through the project 2, 3 and probably up to 5 miles."

With these backups he reminds drivers to slow down for the safety of the workers.

Zishka says in about 2 weeks crews will begin repairing the north bound lanes though he says the heaviest damage is in the south bound climbing lane.

They hope to have both sides of the interstate finished by the next big traveling weekend, the 4th of July.