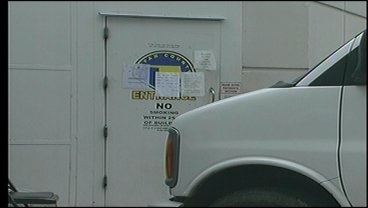 The sheriff says inmate Billy Wallace ran down an alley behind the courthouse, and then headed South on 3rd Street where he got into a car. He says in all his escape lasted about 15 minutes, but that 15 minutes of freedom could put him behind bars for the rest of his life.

Sheriff Bill Sturch says, "At the rate he's going, he's going to spend the better part of his life in prison."

For a second time, 18-year-old Billy Wallace escaped from jailers in Bryan County, and it turns out, it may not have been  just a lucky run.

Wallace's girlfriend, Jessica Miller, and another teenager also face charges. They join Wallace behind bars in the jail that's caught so much attention over the past few years because of escapes.

The sheriff says, "Basically what you have is a guy running into a hornets nest because there was every law enforcement agency in this part of the world looking for him, and moving into that area."

Authorities believe Wallace ran from the courthouse, and jumped into a car with Miller and the teen, then raced down Highway 78, but crashed when deputies put out spike strips.

Sheriff Sturch is looking into whether Wallace had the proper restraints on at the courthouse to begin with. All he'll say is they're still investigating.

"Were checking to see how he got loose. Don't know if he was cuffed when he escaped."

If that's the case, it brings up an even bigger issue for Bryan County because just three weeks ago that's how Wallace got away the first time. A jailer didn't keep him in handcuffs and leg irons. That jailer was fired.

"It's the same old thing. He didn't get out of jail. He ran out of the courthouse, were trying to find out why and how."