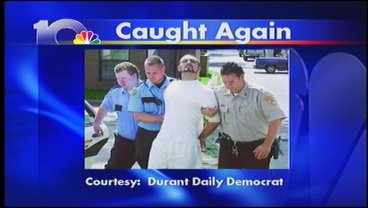 Sheriff Bill Sturch already fired one jailer for Wallace's first escape on May 4th. Now you have to wonder, what's next since the same inmate escaped again.

18-year-old Billy Wallace was re-arrested Wednesday morning.  Jailers initially took him to the the Bryan County Courthouse around 10a.m. for his arraignment on the first escape charges. At that time he somehow bolted out the door, down an alley, and then jumped into a car with two other people.

One is Wallace's girlfriend Jessica Miller. The other a teenaged boy. Since he's a minor, his name cannot be released.

The trio only made it about 15 minutes away when deputies stopped them off Highway 78.

Sheriff Bill Sturch says, "The consequences of doing what he did is unbelievable. That's why you don't have these people do that very much. You could open the door back there and most of the people wouldn't even try because of the consequences that your facing."

Wallace already faced charges of first degree robbery in what was basically a home invasion. He and another suspect are accused of threatening a couple inside their home. Add two escapes, and this 18 year old may spend the rest of his life behind bars.