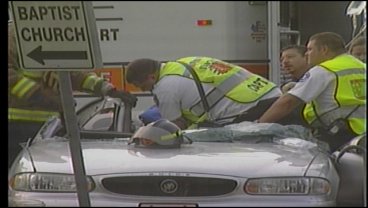 An accident in Bryan County involving four teenagers one of them seriously injured.   The call went out around seven o'clock tonight at the intersection of Silo Road and Church Road, that's North of Highway 70.   It took first responders close to an hour to get a 15 year old girl out of the car. They said it looked like the vehicle she was riding in was t-boned by another. They hit directly on the passenger side.   OHP Officer Scott King described the accident, "A vehicle was stopped at the stop sign.  We had another South bound vehicle that failed to yield at the stop sign to the South bound vehicle and pulled out in front of it and go t-boned." No names have been released tonight.   But Life Star took the 15 year and another girl was taken by ambulance to the hospital.  No word on their condition.  Two other teens in the other vehicle refused treatment.