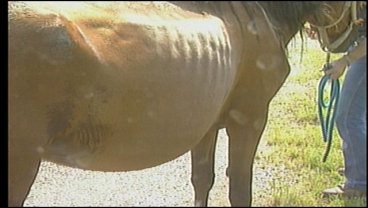 Earlier tonight we told you about the latest investigation into possible animal abuse in Pontotoc county. At the station we get calls all the time with people claiming they see malnourished horses or neglected animals. Tonight KTEN's Sterling Riggs spoke with a local vet to get her take on the problem.

Dr. Katie says says, "If you can't afford to take care of that horse, it's not fair to have that horse die of slow starvation.  Veterinarian Dr. Katie has has been a vet for the past thirty plus years in Denison and knows a thing or two about horses. She says that since the down turn in the economy horse owners simply don't have the financial means to feed them.   She says that is not a good reason not to take care of your animals.

(Dr. Hays) "There is no place for the unwanted horse but in my book there no excuses for a horse to die a slow starving death."

But in her opinion, the problem goes deeper than the economy.   In early 2007 slaughtering horses in texas to sell the meat for consumption was banned

(Dr. Hays) Before we had a slaughter law when you could take your horses to the sale. They would be slaughtered and the carcasses could be sold in France.   It was an avenue for the unwanted horse. Now there is no place to go."

According to Hays, those are the two main problems that are affecting the health of horses in Texoma.   Both of which she says can be avoided.  In the event you don't have the funds to keep your horse healthy, she suggests taking it to the sale, giving it away or just putting it down.

(Dr. Hays) "It's better to have a quick death than a slow starving death and one day it is so starved and so weak that it can't get up and then I have to put it to sleep in the pasture!"