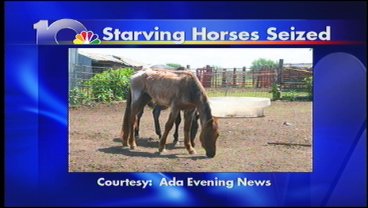 Another case of possible animal cruelty.  This one in Pontotoc County.  The sheriff's department says a Fitzhugh woman is facing possible charges.  KTEN's Meredith Saldana has more on this story.

When they arrived at the home on County Road 3500 they decided to confiscate the horses and send them to a veterinarian for treatment.

Sheriff John Christian says he spoke with the owner of the horses, Shirley Belvin, on the phone.

"I talked to her on the phone and she told me that one of the horses had an ailment and that was the cause of it being so skinny.  The other one was just fine according to her.  That wasn't my opinion in looking at them though."

Sheriff Christian also says when they visited the home there wasn't any grass for the horses to eat or any feed in sight and the only water available to them was stagnant and very low.

We also talked to the owner of the horses but she said she was told not to comment by her attorney's office.

Belvin was not arrested but the case was turned over to the district attorney's office who will decide if any charges will be filed.