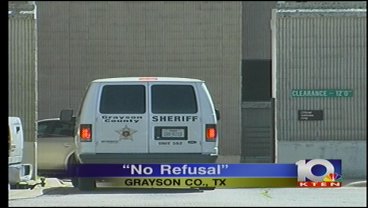 The "No Refusal" policy allows officers to get a search warrant and collect blood from a driver who they think is drunk. District attorney Joe brown says the policy is not just for Memorial Day weekend.

From now on officers in Grayson County will be collecting blood as needed.

Over the past holiday weekend, a total of 15 people were taken to jail in Grayson County for driving while intoxicated. At least two of them were required to give a blood sample after refusing a breath test.

District Attorney Joe Brown believes the new policy is a good one, calling it a weapon in the arsenal.

"I see it all too often where families are ripped apart by it, and anything that we have at our disposal to cut down on DWI's we need to use it, and I think people get used to the idea as we go along."

Lt. David Hawley with the Grayson County Sheriffs Office says, "The difference between the two are pretty close, but it's pretty hard to beat a blood test."

This Memorial Day weekend arrests related to drinking and driving were up more than 50%, but Hawley attributes it to lake levels, saying less people were on the lake and more were on the roads.