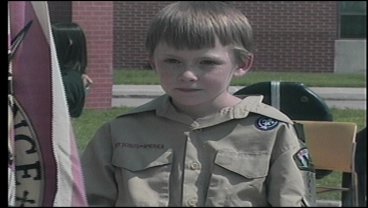 In Ardmore, several young men spent the day honoring those who have served our country and lost their lives for our freedom.  KTEN's Meredith Saldana has their story.

Several area boy scout troops took part in the ceremonies Monday at the Oklahoma Veteran Center and said they were honored to be a part of the festivities.

They told me it was a part of history that they enjoy learning about.

The Boy Scouts learned about each flag before the ceremony and what it meant.

But they tell me being a part of the ceremony meant even more.

Bobby Roper talks about what it meant to him, "I think they felt good, we felt good, so I think we had a really good time as well."

Cameron Sralla says, "I like being able to have a chance to honor our soldiers.  I like having this opportunity to do this."

Leaders tell me it's been several years since they've been able to bring the scouts out to help honor the veterans.

They say it teaches them patriotism and a large part of US history as they learn about the flags and the people who fought for their freedom.

One Boy Scout told me his favorite part was getting to see the men who fought for them up close and personal.