What Memorial Day Means to Veterans 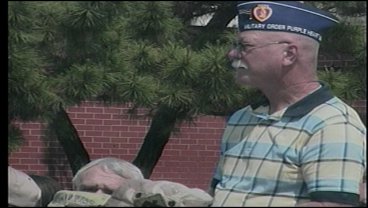 In Texoma our country's fallen heroes were honored at the Oklahoma Veterans Center in Ardmore.  Hundreds of people attended the ceremony.  It was emotional for many of them as they remembered friends, family and loved ones who died serving our country.  KTEN's Meredith Saldana has more.

Veteran Frank Simpson says, "Memorial Day is really focusing on the fallen heroes.  Those who have made the ultimate sacrifice."

Veteran Dirk Bauman adds, "It really comes from my heart.  It's honoring my 5 uncles who served in the military."

The veterans center in Ardmore was packed Monday morning.

Many veterans were also there swapping stories and remembering those lost.

Gulf Veteran Bradley Brown says, "Thought of old friends.  Saw some here.  Went over and communicated with them, talked to them, said hello, good to see them."

Bauman says, "To me it's just... it's really respect, showing respect for your country, for all those who just went and fought and perished as well as those that came back alive and are still serving today."

Representative Pat Owenby talked about the many numbers of lives lost as a result of war.

He told the crowd freedoms that we enjoy were paid for by others.

And in order to keep those freedoms other sacrifices will have to be made.

One member of the audience knows all to well about those sacrifices.

"We had a Gold Star Mother who lost her son in WWII and she's very faithful in coming every year as we celebrate memorial day and honor our fallen heroes," says Simpson.

James Brooks, a Vietnam veteran, made the veteran's center in Ardmore his home back in 1997 and says the ceremony was very important to him.

"It was heart warming.  Made me feel better.  A lot better just to know the people really do care."

And for many people like Brooks, it's a time of camaraderie.

"It's been an honor to see all these people, take pictures.  Associate with my friends, my buddies and just, you know, just a day of remembrance.