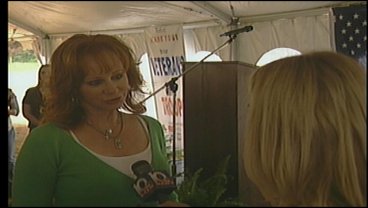 Reba McEntire was in town Saturday for the groundbreaking of "Reba's Ranch House" at the new Texoma Medical Center. Deeda Payton caught up with the local superstar at the event.

The Reba's Ranch House has been a home away from home for families of critically-ill patients for nearly 20 years. Now, the new facility is expected to be even bigger and better.

The original ranch house was built in 1992, with proceeds from five years of Memorial Day concerts by local superstar Reba McEntire.

Reba was born in Chockie, OK, which is approximately an hour away from Denison, and says she understands the need for a place like the ranch house.

"My family has been a part of the Texoma Medical Center for years, coming down here, getting medical help," says McEntire. "So, we understand what it's like to have to sit in a waiting room or wonder where you are going to sleep. So, that's why the Reba's Ranch House is so important to us, so people do have a place to go when they have friends and family in the hospital."

More than 24,000 people have found the comforts of home at the ranch house during their time of need. Guests may stay at the there for a minimal cost of $15 per night, or free, depending on the person's ability to pay.

And Saturday, the Texoma Health Foundation announced it's donating $2.4 million to continue the dream.

"You are a blessing and an inspiration to all of us, and you represent all that is good about our country," says Brady.

But, in Reba's eyes, the people of Texoma are the true heroes.

"I love this area because you do still get up and say prayers," says Reba. "You do say 'I pledge allegiance to the flag,' and you still honor your service men and women. Why wouldn't you want to be a part of this community? Thank ya'll for having me."