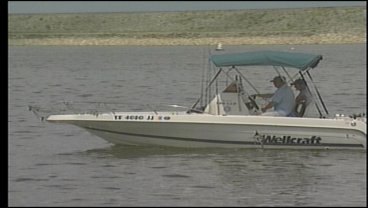 Memorial Day Weekend is the traditional beginning of the summer boating season for millions of Americans nationwide. A big weekend for tourism and business out at Lake Texoma.

Right now, the lake is at 628 feet, still approximately ten feet above what it would normally be this time of year. And, lake-goers have taken notice.

"I've been around here about four to five miles yonder that way, and it is flooded," says Dale Allbright, of Tarrant County, TX. "I mean, there's trees, and there's treed floating around. There really ain't no bank no where."

Adds Michele Griffith, of Arlington, TX: "I know that they've had a lot of the boat ramps closed, so that's kind of a concern that we haven't been able to get into the water because the boat ramps have been closed."

But, they're not letting the high water get in the way of their good time.

"No, that just makes the fishing a lot better," says Allbright. "Once it goes down in a couple of weeks, the fishing's going to be great."

Allbright says he's been coming out to Lake Texoma since high school, 25 years ago.