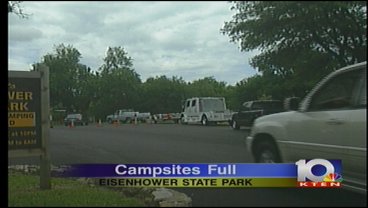 It's here, the weekend we've all been waiting for. Followed by the news so many hoped for, the lake level on Texoma is dropping. Which means people are taking advantage of the local parks and marinas. KTEN's Deeda Payton reports.

Lake businesses are breathing a sigh of relief. Eisenhower state park, in particular, is packed with patrons and excited for the weekend.

The state park is booked! with more and more campers pulling through every minute. Park rangers say they have an online system that accepts reservations for eleven months in advance, and they have been at full occupancy for the last month. But, if you show up at the right time, park rangers say, you could get still get in because of all the people coming and going. "Memorial Day Weekend is an opportunity to let Texoma shine and let the sun shine and let all the campers know not all areas of the lake are flooded."

Eisenhower State Park says all 224 campsites that overlook Lake Texoma are open. Only the boat ramps and fishing piers are under water.