Animals And The Economy - KTEN.com - Texoma news, weather and sports

Animals And The Economy 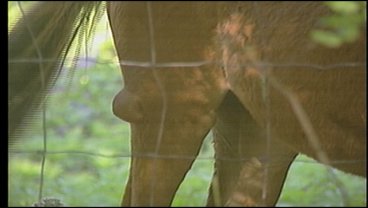 According to the Johnston County Sheriff's Office, there has been an increase in reports of starving animals in the area. Whether it's linked to the economy, officials there can't say. But, it does have residents of Wapanucka concerned. KTEN's Jhen Kordela reports.

"Occasionally, we'd have a case but not like we're having right now," says Sheriff Winkler.

Right now, he and in his deputies are looking into two specific situations in Wapanucka involving horses.

He's already given the owners, in one case, two weeks to get them into better health, or else.

"It's a felony offense, cruelty to animals," says Winkler.

In the mean time, though, residents -- including members of the city council -- are worried.

"You can't put two studs in with mares -- you can't put, you know," says Doris Dooch, a city council member. "And, they're going to have to be watered and tended to and showed that they're fed."

We're told the horses were just moved to a new location. But, when our cameras were rolling, they were eating leaves off of trees, and no water to be found.

"If you can't afford to feed them, you need to give them to somebody," says Dooch.

The owners declined to speak on camera.

Right now, the horses are staying with a family member, the owners insist they're being fed and, they did separate the studs from the mares.