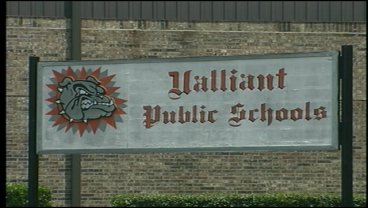 Mark McGee was a valliant native, a husband, a father and according to those who knew him, a true roll model. KTEN's Deeda Payton spent the day in Valliant learning more about the man so many will miss.

Faculty and students at Valliant Schools are in mourning today on their last day of school after losing a beloved teacher in a very tragic accident. "It's a sad day for Valliant."

Mark McGee was struck and killed while mowing his lawn. According to OHP, a possible drunk driver lost control and hit McGee from behind throwing him more than 70 feet. The 47-year-old died in his front yard. "It was a gruesome scene it really was."

Valliant School Superintendent, Don Mullenix, drove over to the McGee's house after hearing the news. "When you get to an accident scene you try to replay it, how did this happen. It's like someone being struck by lightning, a freak deal." Colleagues can't believe what they have lost. "What's going through my mind is it's an awful tragedy for his family and the community, a man that can't be replaced."

McGee's wife and his teenaged son were inside the home at the time and heard the crash. His only son, Colby, says he is in shock. "After it happened I was sitting on the porch watching it unfold and before I knew it there were 300 people here seem like."

He says he was extremely close to his father. "We like to hunt, but we really liked to fish that was our deal."

Friends and family say he never met a stranger, that's why they have received so much support from the community. Mark McGee's funeral will be held Saturday at 10 a.m. at the Valliant Schools Auditorium. The service is open to the public.