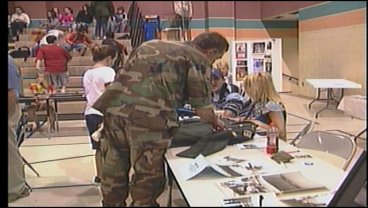 Of course, for the past week or so, we've been talking about the Memorial Day holiday.  Most of the focus, though, has been on the "fun stuff," like the lakes and travel. But let's not forget the real meaning behind Memorial Day. Thursday, students in Sherman helped honor the heroes among us. KTEN's Christina Lusby reports.

Thursday's event has been going on for over a decade at Dillingham intermediate school.

It's a time when students can give thanks to veterans, firemen, police officers, EMTs, and the Red Cross.

Hundreds of students and faculty members gathered in the gym.

School officials say Heroes Day gives them the chance feel a unity and patriotism for America.

The ceremony encourages students to show off heroes in their family.

Fifth grader Matthew Blair said, "When I think about that I just kind of think like I just think that its really cool that you get to learn of what they've done and how they did it all."

Air Force veteran Ed Wells says, "When they get a chance to do this they can walk around they can look at the pictures these folks have taken, they can listen to the stories and they're actually talking to people who have done the things that they see on TV and so I think its marvelous I think I know they do this every year but I think its a great experience for the kids."

Besides veterans and other local heroes, police and fire equipment was displayed outside the school's entrance.

Organizers say this years event was a success and look forward to next year.