Residents Say New Park Name is a Sign of Hope 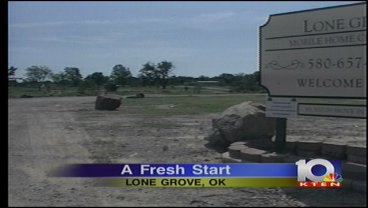 What was formerly known as the Bar-K Trailer Park in Lone Grove, where several people were killed after the February tornado, has been renamed.  Meredith Saldana spoke with residents and has more.

One resident told me it's been hard enough starting over themselves.

But he thinks it was time the park had the chance to start over as well.

The park is now being called the Lone Grove Mobile Home Community and new homes are being brought into the park every week.

The manager says they didn't want the name Bar-K to remind people of the tragic tornado that struck the small community.

The park, too, was in need of a fresh start.

Resident Bill Cross has lived in the park for 15 years and says despite the tragedy this is home.

He says thanks to help from several area churches, friends and the community he and his wife Janet are in the process of moving back in.

Cross says, "I think it's great the new name.  You know it'll change the atmosphere.  I think it will help."

Cross says it's been a tough few months but a change like the new park name is a symbol of hope.

He says the owners are planning on adding storm shelters.

Something they're looking forward to.