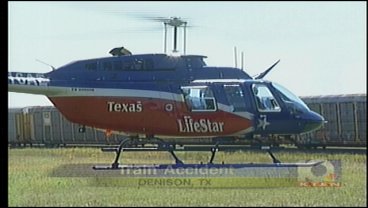 It was breaking news on KTEN News Midday. Police and paramedics are on the scene of a serious train accident.

Officials say a City of Denison dump truck was stopped on the tracks.

They don't know why the truck was sitting there.

We're told a city of Denison worker, inside the truck, was seriously injured.

He was airlifted to a Dallas hospital.

Crews are trying to determine exactly what happened.