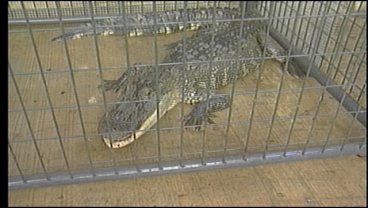 Our cameras were rolling Wednesday morning when authorities loaded up the most wanted critter in the area: A six-foot-long alligator that terrorized a fisherman last weekend at Picken's lake and shut down Herman Baker Park all week. Now, that gator is at a rehabilitation center in Plano, TX. KTEN's Jhen Kordela has an update.

They said it would take a few days, and it did. The six-foot reptile finally went for the bate: A live chicken, safe and sound inside it's own cage. But, it was enough to lure in the alligator.

The gator will get to cool off for a few days in that facility.

While officials there refer to it as a "he," they admit, she might be a "she."

They do know it's larger than other alligators they get in from the metroplex. According to Welch, those are usually three to four feet long.

Officials are waiting on word from the game warden in the Plano area. We're told they'll analyze the gator to see if it's able to be put back into the wild or possibly a zoo.