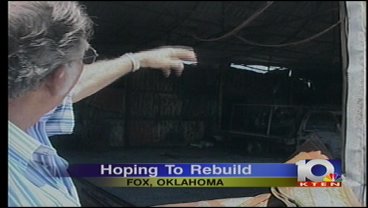 In Carter County, more than a month since wildfires devoured thousands of acres, homes, businesses and even the Fox Volunteer Fire Department.  Now firefighters don't believe insurance is going to pick up the tab for their building and equipment, but this group of volunteers isn't giving up.  Meredith Saldana met with the chief and has more on this story.

The chief tells me they're still waiting on the insurance company to find out exactly how much will be covered.

The old fire department was built in the early 80's by volunteers.

Chief Rudy Stewart is one of the original founders and says he remembers all the time and effort that was put into building it.

Chief Stewart says the new station will be built right where the old one did.

In last month's fire the department lost a brush truck, all of their records, computers and some gear.

The chief says their top priority is rebuilding the department but times have changed posing some expensive problems.

Chief Stewart says, "Material has gone up quite a bit since we built this building.  Labor's high and we volunteer all we can but there's some things that we have to hire done."

The volunteer firefighter's have day jobs and Chief Stewart says they would only be able to donate their time at night and on weekends so hiring help is a must.

They haven't decided yet who will be hired for the job.

The chief says without donations they might not be able to rebuild the volunteer fire department.

They're still waiting to hear exactly what they'll be receiving from the insurance company.

A BBQ/pie auction fundraiser is scheduled for Saturday, June 6th at the Fox gym it starts at 4.