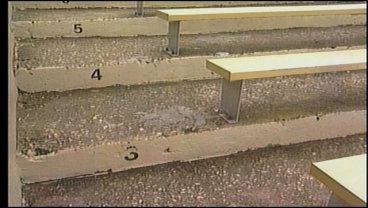 There are construction issues at Munson Stadium. Now, school officials are trying to decide how to fix the 71-year-old crumbling, concrete and stands. KTEN's Deeda Payton has the latest on what task force members have to say.

Last night's meeting of the Denison School Board was pretty powerful. Members heard the results of an in-depth study. What they learned is, they have two options, repair or replace the west side bleachers. If not, engineers say spectator's lives could be in danger.

The task force reviewing Munson Stadium was at the Denison ISD Administration building today. They say none of the problems in the stadium are life threatening yet, but the stands will become a safety hazard in the next three to four years. They say if the stands on the west side are partially repaired, it'll buy them another 10 years.

Bill Lindsay, an appointed member of the task force, explains how the stadium is deteriorating. "Overtime it's begun to give to the north and south, moving as far as one to four inches and there's some disparity. As far as the foot areas go, where you walk, drainage is a very big issue and probably much of the cost will be in drainage."

The Denison ISD Superintendent says both options come with a variety of prices, so cost will play a big role in the school board's ultimate decision.

The task is expected to present their recommendation for the stadium to the school board next week. We'll let you know what they decide.