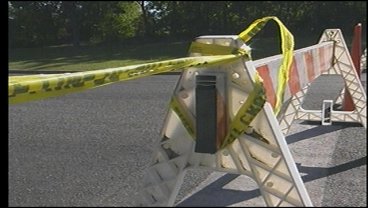 It's day two of the gator watch in Sherman. Earlier, officials thought maybe it went up stream, away from the traps at Herman Baker Park. But now, they're not so sure. KTEN's Jhen Kordela has more.

There have been gator sightings Tuesday, but so far no luck on getting it into the hands of animal control. The way the traps are set up, though, no one needs to be there to catch it.

You could say for Jeff Oliver, also known as Dr. Zoo, wildlife is a passion. Ringo, is his lemur from Madagascar, one of his many pets. He doesn't own an alligator, but like most animals, he knows a thing or two about them. Alligators live in eastern Texas, and the southeastern corner of Oklahoma. But, a gator in Sherman?

"It's unusual in this area," says Oliver. "This is an extreme range for an American Alligator."

Adds Dale Moses, game warden: "If it's in its natural habitat, it's not posing a threat to anybody, we just leave them alone and tell people, either alter their behavior or build fences so their dogs don't get out of there. But, when it's in a city park, where potentially some children could be playing there and stuff, that's the reason we're trying to remove it from the park."

It's no wonder the six-foot creature has sparked some interest.

"It was probably picked up somewhere when it was small down in, around the coast or in Louisiana or Florida or somewhere," says Moses. "And, somebody turned it loose in a pond. We think it was washed up here down the creek during the flood and the rains we've had over the past three weeks."

Right now, authorities have shut down Herman Baker Park. They have traps set up, one with a live chicken, although it's in a cage, so the alligator can't actually get to it.

Gators are protected in Texas. So, once it's caught, officials will determine whether it's conditioned to humans. If it is, they'll try to send it to a zoo. If not, they'll release it in deep Texas, possibly a more suitable place to call home.

As for those "gator sightings" we mentioned earlier. According to the game warden, those here setting up the traps saw it trying to feed on ducks.