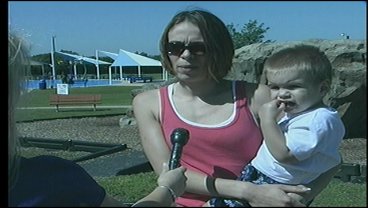 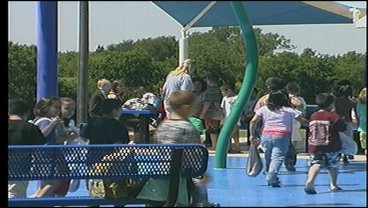 It's the latest trend for city parks: "spray grounds," for kids to splash around and cool off on a hot summer day. But this popular spray ground at Hawn Park in Sherman is now the subject of safety complaints. KTEN's Deeda Payton reports.

The City of Sherman says they received one complaint from a parent, but that one complaint was enough to shut off the water until they can repair the mat.

What the city says they didn't expect though, was about a hundred elementary kids to show up.

Misty Moody is a mother of three who frequents Hawn Park in Sherman.

For years, her kids have enjoyed the spray ground, but she says this year it's too slick.

She told KTEN News, "I'm afraid that my kids or someone else's kids are going get hurt real bad."

Parks and Recreation administrators say the spray ground was recently repainted, as they say it has been every five years.

But this time, it was done a little differently. Kevin Winkler told KTEN News, "In the past, when we've had it done, the paint is applied and then the grit."

But this year, they mixed the paint and the grit together, a process moody believes made the surface too slippery.

Winkler said, "Based on the fact of that one complaint, we decided to go ahead and get more paint to do another coating of the surface."

Winkler adds, "If we see a problem, especially a safety problem, we'll do whatever we can to accommodate."

So for now, the water at the spray ground is turned off.

But while our cameras were rolling Tuesday, some 100 elementary kids showed up for a field trip.

Apparently, no one told them that it was high and dry.

Upset parent Pete Rodriguez told KTEN News, "We were supposed to come out here and have a picnic and the water should be on and everyone brought their swimsuits and towels ready to have some fun and I don't see the water coming on."

So, do they know that the water's not going to be on today?

However, Crutchfield principal Jill Parker says they were planning on using the spray ground and had even contacted the city prior to their field trip.

She says the city confirmed that the spray ground would be open the day before.

Winkler said, "To my knowledge, no one contacted us if they had we could have made them aware that the water was going to be off."

Either way, it was a dry field trip for these kids. Even though the water stayed off, they didn't let it wash out their fun.

Moody said, "if it's going to endanger children then they shouldn't have it."

Sherman Parks and Recreation officials expect the water will be off for the rest of the week, until the surface can be repainted.