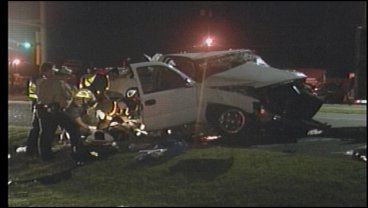 Just because you refuse a breathalyzer test, you could still be hauled to jail, because of a blood test. Tuesday, officials in Grayson County announced a "No Refusal" policy, another reason not to drink and drive. KTEN's Deeda Payton reports.

You could say Grayson County is out for blood.

Any suspicion of DWI, and you will be given a breathalyzer or blood test right there, on the road.

The goal: stop drunk drivers before they hurt or kill anyone, including themselves.

This is a picture of a drunk driving accident from 2005.

The two victims of this accident are the now the driving force behind the "No Refusal" weekend.

Their accident along, with many others, have prompted lawmakers and enforcement to crackdown on drunk drivers, by any means possible.

And from this weekend on, that comes down to court ordered blood tests.

On October 13, 2005, then 21 year-old Justin McKenzie and 19 year-old Chase Ward were driving on Texoma Parkway in Sherman when a Ford F-250, driven by a drunk driver, plowed into them.

Timothy Whitmore drove through a red light and broadsided the two, leaving them with permanent injuries, including brain damage and ruptured organs.

Whitmore is now behind bars, serving a 35-year sentence.

One in three people will be affected by drunk driving in their lifetime in one way or another.

So if you drink and drive, be prepared to take a breath or blood tests on the roads this weekend.