Gator Watch in Sherman is the Talk of the Town - KTEN.com - Texoma news, weather and sports

Gator Watch in Sherman is the Talk of the Town 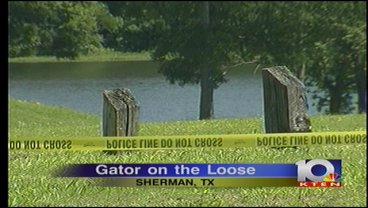 It's the talk of the town, a loose alligator in a Sherman City Park. KTEN's Deeda Payton spoke to a game warden about catching the animal.

The traps are set, complete with chicken as bait and still no sign of the gator.

Gator watch continues more than 24 hours after the first sighting at Herman Baker Park. The park is currently closed, closed until game wardens can lure and capture the reportedly six-foot-long reptile.

The alligator was first spotted yesterday by a fisherman and since then it has been the talk of the town, even the elementary schools. Students are fascinated. "It is awesome and scary at the same time."

Game wardens say they are looking for a six-foot-long alligator and similar to the one in this picture. They have set three traps on Pickens Lake and hope to have it captured by Tuesday. Once they catch it, they say they will relocate the animal.