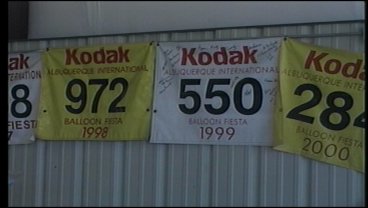 We told you Sunday night about reports of something falling out of the sky.  It was in fact a blimp with engine failure on Plainview Road in Carter County. Meredith Saldana met with the man that was in the blimp she has more on his story.

Martin Polzein, the pilota and owner, is okay but Sunday night he had to tie the blimp to a tree and wait until Monday morning to be able to get it out.

However 30 minutes before he got there he received a call that the blimp had taken off.

Polzien who's been in aviation for many years says he landed on a rocky cliff then walked nearly a mile in the dark through rough terrain.

He says he worried about tripping on rocks, injuring himself and not being able to get to help.

"Well my biggest concern I guess was when I found out I couldn't get off that cliff!  What am I going to do and how are people gonna find me?  And then cell phones are great but my buzzer was going off that the battery was getting weak that was probably my biggest concern I'd lose communication."

Before his battery died he was able to get in touch with OHP.

They turned on their lights and sirens and Polzein was able to listen for the sirens and tell them where to go.

They used their lights and a 4-wheeler and finally found him.

He tells us the blimp was found Monday afternoon in Decatur, Texas with minor damages and thankfully it landed in an open field.

He's picking it up now and says it's just a matter of time before he'll take to the skies again.