After Receiving A Home Makeover A Single Mother of 3 Is Evicted - KTEN.com - Texoma news, weather and sports 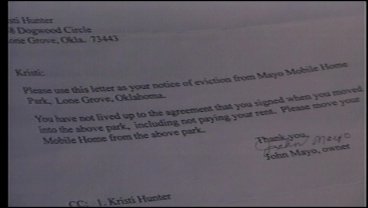 We told you Sunday IBC Bank in Ardmore put together an Extreme Home Makeover  in Lone Grove, Oklahoma for a single mother of 3 who lost everything in the tornado.  Now, the landlord of the property her new home is on is evicting the family.  Meredith Saldana spoke with bank representatives and the home owner.

We contacted the owner of the Mayo Mobile Home Park and he said it's a legal matter and he had no comment.

After the February 10th tornado Kristi Hunter's brothers put together money they had and bought her a mobile home.

But just last week she received notice that she was being evicted.

Hunter works nights at Winstar Casino and says the owner of the park told her neighbors were complaining that she was leaving her 15-year-old son with the two younger boys.

But neighbors say they have no complaint with Hunter.

Tonya Briscoe with IBC Bank was one of the volunteers who worked on Hunter's home and says this stress is the last thing Hunter needed.

"And I felt so bad you know, that's the meaning of the whole project is to make it where it wasn't stressful for her.  To come in and relieve that stress and do something good and she wasn't even able to enjoy it yesterday because as we're revealing the home they're out taking pictures."

Hunter has receipts of payment showing she's paid her rent but is still being evicted and says now she has less than month to find a piece of property to move her new home to.

She has to move by June 11th and she says she doesn't want to move to another mobile home park.