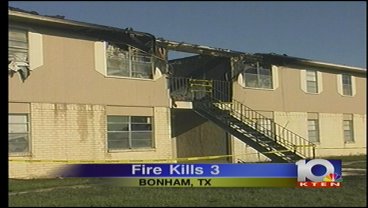 Officials are still investigating after three people died in a fire that broke out at a Bonham apartment complex.

The two story complex caught fire late this afternoon sending residents running from their apartments to safety.  One mother and her two children were trapped in their apartment on the second floor.

On-lookers say the three victims could not escape because the only stairwell had caught on fire. The woman's family was contacted by other family members residing at the complex and when she arrived on scene officials told her the fire was to strong and her daughter and grandchildren did not make it out alive.

The mother, Brenda Chesser blames her daughter and grandchildren's death or the escape route.   "They were trying to get out and there was no other escape."  A family member and resident at the complex, Mary Miller, said she felt the escape route was inefficient and needed improvements.  "If they had a back stairwell, her and her babies could have been out and alive but she couldn't get out because there was only one way out and that was on fire."

Due to the smoke and fire damage, around eight families must find another place to stay tonight.  The Red Cross has stepped in to help.  They are providing food, water and shelter to those who had to leave the apartments.