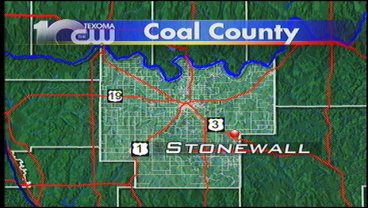 A fatal accident in Coal County claims the life of a Stonewall man. Troopers say alcohol is to blame. It happened early Saturday morning on Old State Highway 3, just east of Stonewall.

According to the accident report, 34-year-old Rocky Thompson of Tupelo was behind the wheel of a GMC pick-up. Troopers say he failed to stop at a stop sign, and slammed the vehicle into a tree.

His passenger, Creede Lee Smithee of Stonewall, died from massive injuries at the scene. Thompson is recovering at Valley View Hospital in Ada. He's listed in good condition. According to the troopers' investigation, Thompson was under the influence of drugs and alcohol at the time of the crash.