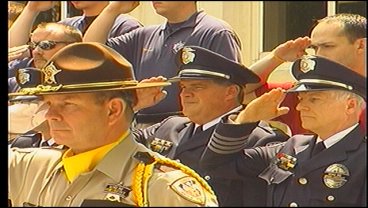 On Friday afternoon, Sheriff Keith Gary read off the names of the 17 officers who have died in the line of duty in Grayson County. The most recent a Whitewright officer shot and killed in 2000.

The event comes as part of National Police Week. It's a time when peace officers across the country come together to pay tribute to those lost in uniform.

Sheriff Keith Gary says, "They paid the supreme price. They knew what they were getting into. We know that when we come in to law enforcement, but really we want to honor those folks today."

Sgt. Bruce Dawsey with the Sherman Police Department says, "When you leave your house at the beginning of your shift, and tell your family good bye, there's no guarantee that your going to be home."

Before coming to the Sherman Police Department, Sgt. Dawsey spent six years as an officer in Houston. There he lost three fellow officers while in the line of duty. He says they all died within their first five years on the force.

"It makes you refocus on your tactics and what you do in your job, it also makes you appreciate the small things in life a little more."

Sgt. Dawsey says at home he doesn't talk about the dangers of his career with his children, but he's made a promise to his wife to always wear his vest when in uniform.