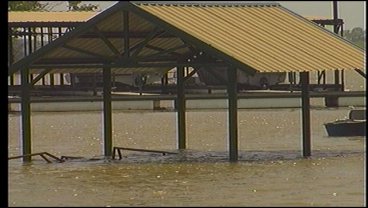 The corps says they're releasing water, and have no plans to stop generating. Marinas are among the hardest hit when the lake floods, but the good news is many are still open.

Eisenhower Yacht Club is open despite the rising lake levels, but not without a few kinks.

They've closed their boat ramp, shut off power to a about third of their boat houses, and walkways leading up to them are under water, yet they do have water taxis to escort customers, and the fuel dock is open.

Campgrounds on the state park are also open. However, the fishing pier and swim area are not.

Ulmer says, "We work really hard trying to make preparations for the future. We've got everything where we can pretty much deal with, for the most part, anymore high water."

Ward says, "We're pretty optimistic about the rain stopping. This is as flooded as were going to be, so we can kick off the summer come holiday weekend."

At Flowing Wells Resort in Pottsboro, the boat ramp is closed to the public, but not to the people staying here. Also closed, fuel dock because the tank is under water. Walkways leading up to the boat houses are under water, but employees are taxing customers and the electricity in them has not been affected.

The corps says the lake is expected to crest on Thursday at about a foot higher than it is right now, not counting any rain that comes this weekend.