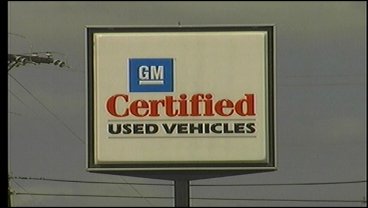 EDITOR'S NOTE: We are learning now that there will not be a list per se. Instead, each dealership owner will informed individually by General Motors about their fate.

When the economy tanked, the auto industry was the first to take a big hit.  Automakers began laying off workers and now dealerships are being forced to close. GM dealers are now sitting back waiting on their list of closures that will come out Friday.

Those associated with GM sit in anticipation, waiting to see if the list will affect their dealership or dealerships around the community.  Ron Barbosa, a Finance Director at Holiday Chevrolet in Whitesboro, says, "We have a lot of friends out there that could have some bad news coming up, no one wants to get that express mail package."

The closing are inevitable and the dealerships on top of the list will be comprised of those branches that are lagging behind GM's standards.  Holiday Chevrolet owner Matt Johnson says, "I can assure you that if there aren't awards on the walls of the facility, it is very old or outdated or their sales are down, very few cars on the lot or their sales are consistently low, they could be on the list."

If closures on the list affect dealerships in our area, the community could be affected as well.   Johnson says, "I jut pray there aren't any dealerships around these communities because I know we are very close knit branches and there are many schools in small towns in this area that depend upon our donations and advertising dollars."  If Holiday Chevrolet does appear on the list, they say they have a plan.  Tony Ventura, Finance Director, says "We will deal with it if it comes.  We have a ton of inventory that we will have to get rid of but the good news is we have pre owned vehicles."  But the dealerships says they do not believe they will have to rely on a back up plan saying sales and scores are meeting GM's standards.

GM has mailed out letters to nearly 1,000 dealers, notifying them their franchise agreements will not be renewed when they expire next October.  Another 500 dealers will be cut loose when GM sells the Hummer, Saab and Saturn brands.