Sloppy Detour for Residents of Oak Hill Rd. in Cartwright 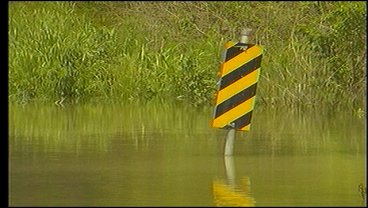 As of Thursday, Oak Hill Road is under water. At it's deepest point it's about a foot under water. The reason they've closed it off is because when a school bus came by, it actually sank into the road.

To get home, residents who live off Oak Hill Road in Cartwright have to take about a three mile detour. It includes driving down Boat Club Road, through a private neighborhood, and cutting across a wooded field that's now turned into a boggy muddy path.

Resident Glenda Mahoney says, "I'm just thankful that they have opened up this road to be able to go back and forth as we need to. If it wasn't for that we'd be totally stranded."

Resident Tim Johnson says, "It makes it extremely difficult to get to work. Do a lot of walking. Luckily the neighbors on the outside help the ones stuck in here."

Resident Kerry Thomas says, "I've been out here 30 years and seen it many times and as much money they spent repairing it they could have built us a bridge already."

It comes down to how much more damage vehicles would cause to this already sinking stretch of concrete. Just the weight of a school bus Wednesday afternoon caused it to start crumbling and caving in.

We told you, county commissioners promised two years ago they would build an alternate road for these home owners.

Commissioner Monty Montgomery told KTEN's Vanessa Bolano the project is still on schedule, set for this July, but for those who live in the area they call "Gods country," the question remains, why has it taken two years to just have a plan instead of action?

Johnson says, "Supposedly we were told two years ago there would be works in progress to have another way out and it just didn't happen."

The county says once this water is gone, they'll begin working on the road. The corps is expected to release some water Thursday night.