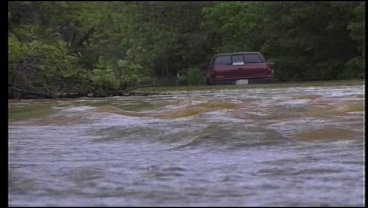 Wednesday night's storms dumped a lot of rain on Carter County it seemed to just sit on top of folks there for a while.  The worst of it near Healdton at the old Iron Top Bridge.  Meredith Saldana has more.

The bridge is completely submerged and while most of the areas that flooded Wednesday night seemed to clear up by the afternoon this area didn't seem to go down.

And although signs are posted warning drivers about the flooding danger in this area someone still tried to make it through the water, but as you can see they weren't very successful.

Other drivers told me this area floods often but they've never seen the bridge completely submerged.

And they said normally it's just a small area that seems to accumulate water after a heavy rain.

Don Martin lives on Cimarron Road and believes the flooding is so bad because of the consecutive storms that haven't given the area time to dry out.

"That's what I would think.  All the ponds have filled up.  Everything's like that and it's bringing it down and washing things away like that.  Because like I told you my pond that had hardly any water in it at all has been over flowing for 2 or 3 days now."

He says in the nearly 40 years he's lived on Cimarron he's never seen his pond over flow until now.

Martin says he's thankful for the rain but now he's hoping for some sunshine to help dry out areas like Iron Top Bridge.