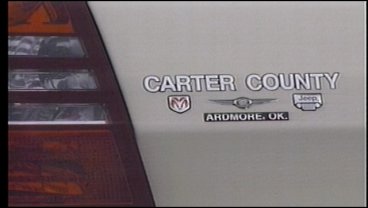 While some area dealerships were hit hard by the news of closings Thursday morning.  Others were thankful to see they're names weren't on the list.  Meredith Saldana visited a Chrysler dealership in Ardmore and has more on this story.

Rocky at Carter County Dodge says he received the confidential list in the mail and although he's been happy with his dealerships performance, he still wasn't sure what to expect.

Rocky is the VP of the Dodge Advertising Association and says his phone has been ringing non-stop for the last few days.

Those on the other end of the line were wanting to know if he had any inside information.

But he tells me he, too, had no idea what to expect.

After receiving the list Thursday morning he says he was surprised to see other large dealerships didn't make the cut.

But he believes location is key and he says he also thinks dealerships like his that keep Dodge, Chryslers and Jeeps on the lot had a better chance of survival.

"I believe the government is expecting us to be like Toyota.  You know Toyota only has 1,400 dealerships nationwide and GM has 5,200 and therefore every Toyota store in the nation is profitable except for maybe one or two.  So that's pretty good odds."

He says now it's time for his dealership to move forward.

Rocky tells me making the cut opens the door for more opportunities for Carter County Dodge.