Rain Causes Revenue Loss for Some on Lake Texoma 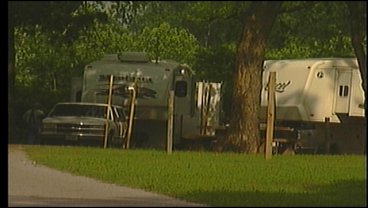 The cost of all the rain and flooding is loss of revenue for Lake Texoma.  Lake Texoma's water level has risen to within 12 feet of the flood levels back in 2007 and it's bad news for tourism.

The rain has caused flooding for many campsites forcing managers to shut down many of the areas.

As the areas remain closed, tourism in the area is dropping.  And if you had plans to head out to the camp grounds for Memorial Day weekend, you might want to rethink your plans as many of the sites will remain closed until June 7, 2009.

Lake managers say they will remain closed, so they will have time to clean up the damage and debris in the lake and along the campsites.  Once the grounds have been cleaned the campgrounds and reservations we resume as normal.

Until then, the area is taking a major hit to its revenue and it is not only affecting the lake and campgrounds but also the other businesses along the lake.

The lake's crest level is directly related to the rainfall.   Right now the elevation is at 627.41.  The lake's normal level falls around 617.  Levels of concern start a 630 in which management requires lake monitors.  If they lake hits 632, 24-hour lake monitors are assigned to the lake area.

EDITOR'S NOTE: KTEN News spoke with Bill Bailey, owner of Little Glasses Resort and Marina in the Madill-Kingston area of Lake Texoma. Bailey says his resort and marina is still open and his business has not been hurt by the rising lake levels.