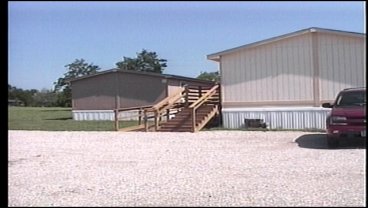 It's been just over 3 months since the tornado that tore through Carter County.  We told you then about Ardmore Adventist Academy being destroyed in the Majestic Hills neighborhood but school officials say there is good news behind the destruction.  Meredith Saldana visited the school and has more.

Since the tornado classes were being held at a local church but now the school has rented portable buildings and says they're working on rebuilding.

Principal Stephen Dennis says teachers and students are thankful to have classrooms of their own to spend the academic day in.

And in the last few days they've even been able to watch as what was left of Ardmore Adventist Academy was torn down and pushed into a large pile of bricks.

Dennis says thankfully no one was injured at the school and thanks to their insurance coverage they're now able to call it a blessing in disguise.

Dennis says, "It was really a blessing in that stuff was still under warranty but you know now we get to replace that with newer stuff even."

Dennis says the kids and teachers will be getting new I-Mac computers as well as new computer stations and chairs.

He says insurance companies take time to assess damage and the kids have been patient and are now just ready to be back in their normal school environment.

Dennis says next year classes will still be held in the portable buildings but they're hoping the new school building will be finished by the 2010-2011 school year.