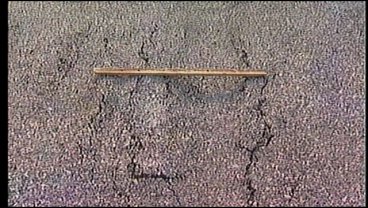 Oak Hill Road in Cartwright has begun to sink because the ground under it has been wet and soft for days.

Each day the water from Lake Texoma has been creeping up onto the road. As of Tuesday, it was inches from covering it, and with the lake expected to crest on Monday residents fear they won't have access in or out.

Rising lake levels are causing water to inch closer to Oak Hills Road in Cartwright. About two years ago the area was flooded leaving residents trapped.

Glenda Mahoney, who lives off the road, says, "We were forced to purchase rafts because we didn't have boats that were small enough to go in there and paddle across."

Howard Mahoney has spent the past 30-plus years of his life there. Mahoney is especially concerned, since he's handicapped and depends on oxygen.

"Anything that happens to me, I wouldn't have any way to get out."

Mahoney and his daughter-in-law, Glenda, say the county promised to build an alternate road for emergencies like flooding.

Glenda Mahoney says, "It's been almost two years, and they have not done anything other than flag the area to build a road."

Howard Mahoney says, "The last I heard, they ran out of money."

Oak Hill Road has been redone since the last flooding, but Mr. Mahoney says it won't help much.

"From the looks of it, I think they might have given us another 2 feet because it was 627 when it went over last year."

Despite the flooding, Mahoney says he won't leave his home here in Cartwright. "You see what we got here. This is, to me, this is God's country."

Tuesday afternoon the lake was at about 627 feet. Because of the new asphalt that's been laid down the water hasn't gone over, but on Monday the it's expected to crest at 628 feet, which would mean Oak Hill Road would be under water, and that forecast could change with more rain that's expected Tuesday night.