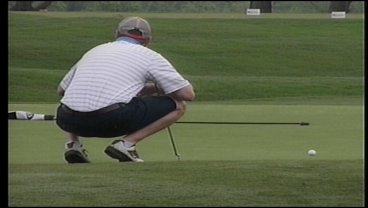 The 2009 Winstar World Casino Golf Championship Pro-Am tournament kicked off at 9 am Tuesday.  There were 17 teams on the course all raising money for the Chickasaw Nation Boys and Girls Club.  KTEN's Meredith Saldana has more.

Winstar's head Golf Pro, Mike Hammond, says this is the first time this tournament has raised money for the boys and girls club.

He says since Winstar is owned by the Chickasaw Nation it was a perfect fit.

Tuesday teams were made up of 4 amateurs and a pro from the Adams Golf Pro Tour Series.

Golf Pro Jarrett Turner from Dallas told us anytime they can help give back and show the amateurs a good time it's all worth it.

Everyone on the course seemed to be having a good time while raising money for the charity.

As for the amount raised Hammond says they're hoping for the best.

"Well that number has yet to be determined.  But hopefully it's a substantial amount that'll really help out the kids," says Hammond.

The Adams Pro Tournament starts Wednesday and will continue through Saturday.

Over 130 pros are entered in the tournament.