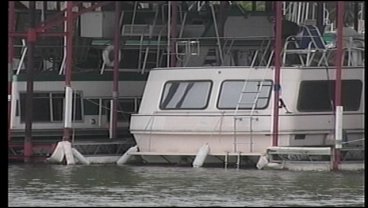 While all the rain has caused flooding issues across the area, especially Lake Texoma, officials at Lake Murray say the rain was a blessing.  Meredith Saldana visited Lake Murray Marina and has more.

Employees at the Lake Murray Marina told me that it's nearly impossible for Murray to flood because it has a spillway and is spring fed.

Unlike lakes like texoma that are fed with large tributaries that bring water into the lake.

Matt Looney at Lake Murray Marina says the lake will go up roughly 2-3 inches per inch of rain.

But Looney says just 2 weeks ago the lake was about 4 feet lower than normal and so low they were facing the decision of possibly having to move boat slips and boat houses to deeper water.

But Looney says thanks to the nearly 12 inches they've received in the last few weeks they're in good shape.

Looney says, "And really the amount of rain that we're expecting to receive over the next couple of weeks, even right now, just mean that we're gonna be well positioned for the entire summer season."

You may remember the OHP Troopers telling us just a few weeks ago about rocks and other objects sticking out of the water and causing a danger for boaters because the water levels were so low.

But looney says thanks to all the rain most of those objects should be covered up again and they are now expecting the normal Memorial Day crowds.