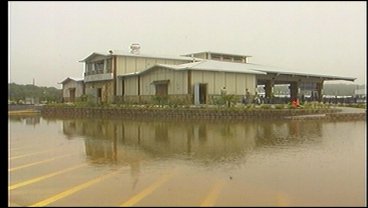 As of Tuesday, all the roads leading to the boat houses are closed because of flooding. As for their new restaurant, "The Island", it was built higher than "Pompanos", but with lake levels rising they're closing it this weekend.

General Manager, Tim Hayes says, "I'm quite disappointed that the corps, my good friends there, haven't started to release water. We fully understand now that there's issues down at the river, but a lot of businesses on the lake have not recovered from 2007."

Tuesday employees of Highport Marina were busy emptying out their new restaurant. "The Island" opened about five weeks ago without a glitch, but now rising water has forced it to close down.

Hayes says they expect to be back in business for Memorial Day weekend. In the meantime, he says, the scene is all too familiar.

"It feels exactly the same way as it felt in 2007, so it's very frightening for us."

All the electronics inside "The Island" were installed 640 feet above sea leave but they're taking them down as a precaution.