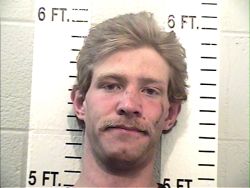 Yesterday evening shortly before six o'clock, officers responded to a shoplifting call at a convenience store in the 2500 block of Southwest Broadway. Store personnel told dispatchers that an unidentified white male entered the store, selected various snack items, and left on foot without paying for the merchandise.

Employees of the business said they called police and then followed the suspect when he did not pay, confronting him in the parking lot of a nearby restaurant just moments later. The suspect, later identified as 25-year old Ryan Krebs of Ardmore, became verbally combative, telling the store clerks to leave him alone. The clerks stated Krebs placed his hand on the hilt of a large knife which was sheathed and tucked in the waistband of his pants, informing them, "I got a knife." The clerks withdrew and Krebs ran into a nearby wooded area.

A short time later, Officer Brice Woolly and Major Rickey Lawrence searched the wooded area. They heard a sneeze, and upon closer inspection discovered Krebs hiding next to a tree surrounded by thick brush and eating chips from a bag. Krebs was ordered out of the thicket. The suspect complied and was arrested pending charges of armed robbery.

Several snack wrappers were discovered at the location and were placed into evidence. The estimated cost of the stolen merchandise is $27.00.