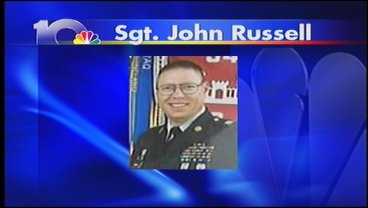 An emotional day for the family of Sgt. John Russell.

His father, Wilburn Russell, says he got a call from his daughter-in-law on Monday telling him his son, Sgt. John Russell, was in custody for shooting five of his fellow soldiers. He says since that moment his world has come crashing down.

"I'm sick. Not just for my son, but for everybody involved. It should of never happened. You'd think they'd be smart enough to realize it. I'm sorry."

"We thought he'd get killed, we never dreamed in our wildest dreams something like this would happen."

Wilburn Russell says his son has been charged with murder after shooting and killing five troops at a military counseling clinic in Iraq. A clinic his father says broke his son.

"The stress center didn't tell him, we're here for your benefit, we're here to find out emotionally if your able to go home and not do anything to yourself or your wife. They didn't tell him that, they just told told him your out of here fellow."

Russell says in six weeks his son would have completed his third tour of duty in Iraq and moved in to his new home in Sherman.

"John's whole life was the military. He had approximately 15 or 16 years in. He thought he was saving lives."

Sgt. Russell worked as an electric technician of the 54th Engineer Battalion based in Bamberg, Germany. His father says their lives will never be the same.

"Tell all America that were sorry. My whole family, everybody. Were just devastated."

Wilburn Russell says he hopes the government looks into stress centers. He believes it was the interview process at the stress center that caused his son to lose control and break down.