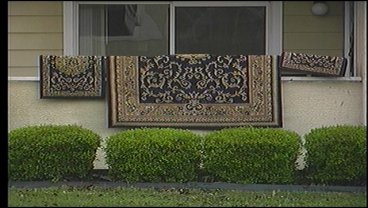 Monday morning's downpour is hindering clean up efforts at a Sherman apartment complex. We first told you Saturday more than 30 residents are dealing with flooded homes at the Villas of Parkhaven. It's the same complex that flooded in 2007. Now residents are wondering if management is doing enough to prevent it from happening again. KTEN's Katy Blakey has more.

Residents say they're exhausted, tired of the rain, the mess and the management. But the apartment says there is not much else they can do.

Cleaning crews were out all weekend trying to dry out 30 units. Several residents were left without a place to live for the weekend. Management says they have no extra units to house affected residents.

Many of those left-out-in the rain spoke to KTEN News over the weekend. They say something has to be done to fix the problem.

After the 2007 flood, Villas management installed a new drain system behind the building to catch excess water but it wasn't working Friday night. They say they'll keep working on the problem until they get it fixed.

"We sympathize with everyone who is going through this," said Amy Underwood, a leasing consultant for the Villas of Parkhaven. "We know it's hard and very inconvenient and so we just want to make it as easy for everyone as possible. We're doing everything we can to make sure they're taken care of and happy. Trying to keep them here."

We asked management if they told renters who moved into the now flooded complex, that it flooded back in 2007.

They said they believed most people knew but could not specify if they told each renter before they signed the lease.

Management says they want to work with each resident, and are willing to allow them to break their lease, if that's what they want to do.