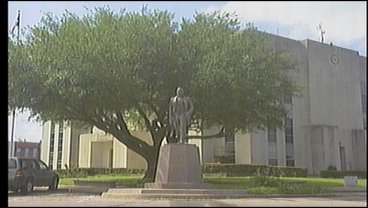 Questions about the legality of some voter registration forms in the city of Bonham, TX. But, it comes down to rules that apply to communities across Texoma. Now, it's ended up on the Fannin County district attorney's desk. KTEN's Jhen Kordela spoke with the D.A. and has more.

After receiving concerned calls from viewers, asking about applications for mail-in ballots, we headed out to Fannin County. Here's what we found.

At the start of the week, a letter, written by the Bonham City Secretary, landed on District Attorney Richard Glaser's desk. KTEN obtained a copy of that letter, which questioned attached voter registration forms.

All of them, applications for a mail-in ballot. All of them, were for elderly individuals. And, all of them had the same handwriting, except for the signatures.

The only signature missing? That of the witness or, in this case, person assisting the elderly individuals.

"In those instances, those should be signed by the person that assisted the person with that card," says Glaser.

The letter, addressed to the D.A., identified the assisting individual: the wife of a candidate running for office.

With the election just days away, the D.A. has looked into the matter and decided not to investigate or pursue charges.

"The important thing to remember is we want as many people to vote that can vote," says Glaser. "Elderly people have a difficult time getting out, getting around. So, this person was trying to do a good thing for them. But, she should be more careful next time."

The D.A. admittedly knows those involved.

"Yes, I know this lady very well," Glaser says. "And, I know her husband, who's the candidate. I know all the candidates, some I know better than others."

He insists his decision is fair.

"I certainly hope that's not a suggestion that I might be biased," says Glaser, "because, I think the integrity of our office has never been questioned  when it comes to that."

We did contact the office for the secretary of state.

Officials there couldn't comment on this specific case but referred us to a section of the election code, which states:

"A person who in the presence of the applicant otherwise assists an applicant in completing an early voting ballot application commits an offense if the person knowingly fails to comply with section 1.011 (d) in the same manner as a witness."

"The witness must affix the witness's own signature to the document or paper and state the wittness's own name, in printed form, near the signature."

KTEN did speak with both candidates involved. Neither one wanted to comment on camera or off. We decided not to mention their names because there is no official investigation.