How The Rain Affected Farmers and Ranchers - KTEN.com - Texoma news, weather and sports

How The Rain Affected Farmers and Ranchers 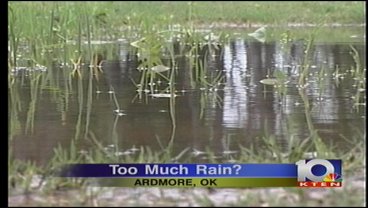 Farmers and ranchers have been praying for rain for weeks.  But was this week's rain too much?  Meredith Saldana talked to the experts.

I was told this has been just the right amount of rain for farmers and ranchers but now they're hoping for a little sunshine.

Many farmers and ranchers use their ponds on their property to provide water for their livestock and for the last few weeks those ponds were going dry.

James Locke, a soils and crops consultant, at The Noble Foundation says many people may not have known but we were actually coming out of a drought that was worse for the ag industry than the 2006 drought.

So this rain was definitely needed but for now they could use some warm weather.

Locke says right now the soil profile is full and sunshine would be great.

"We don't want it to stop raining for the rest of the spring," says Locke.  "Ideally we'd like to see it continue to rain at least every week or two for the remainder of the summer.  But that probably won't happen but this is a great start to the spring time."

Locke says the only problems it may have caused would have been for people with pond dams that weren't strong enough to withstand the amount of rain and minor reports of erosion.

Locke says overall the rain was good for farmers, ranchers and crop growers.