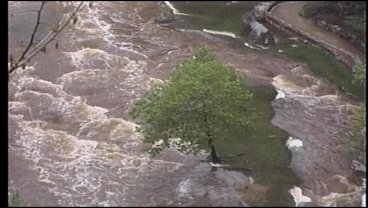 The Turner Falls Park in Davis, Oklahoma filled with water causing the park to close for the second time in the last week.  The park closed last week because of the rising water level and finally reopened Sunday, but Davis police say Tuesday they were forced to close the park again.  KTEN's Meredith Saldana has more.

The Davis Police Chief Danny Cooper says this recent rush of rain is the worst they've had in years.

You may remember just over 2 years ago the park was overcome with water and visitors were stranded throughout the park.

This time Chief Cooper says they had enough warning and everyone at the park was warned early with enough time to evacuate.

In the last week the park has had roads and trails washed out, mud slides and even had a few picnic tables that were swept away with the raging waters.

But he says when the damage is minimal and everyone is safe there are pro's to a situation like this.

"It does the park good.  Especially the stream that it flushes it out you know if we have moss and stuff like that build up in certain areas it keeps the water fresh."

Chief Cooper did say that closing the park puts a damper on the parks financial income so the sooner the water goes down the sooner they can reopen.

They do hope to have the park reopened on Friday.